I am not really the type of person who takes time in counting the years of our wedding anniversaries. But my daughter Mae makes our (25th) Silver Wedding Anniversary special. 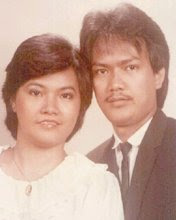 Why? I’ll tell you later.

I’ll tell you first our love story and how we ended up from worst enemies to friends, and then lovers.

9 years of being steady plus 25 years of married life and still going strong is perhaps a record of sorts here in our country. Maybe we have grown tired of hearing other married people fight and getting separated that’s why our married life works – yes!

No! I think we become closer because we don’t discuss things that bother us but we talked them over. We spent a few minutes discussing things that happened within the day, before going to sleep.

We know each other so well that we give time and space when the need arises, without each one asking for it. I encourage her to go out and join her friends when she get invitations; to spend time for herself to break the monotony of a stay- at- home mom. She grants the same courtesy to me.

She was our neighbor – the quiet type. She seldom came out of their house. My friends then were her two older sisters because I was two years older than she was.

I used to call her “Labo” because she was wearing thick eyeglasses. And she called me “Palito” because I was thin and quite a joker during those days. Our constant quarrel and bickering made our neighbors’ and friends’ day complete.

Our neighbors used to tease us every time our path crossed because they knew that we hated each other. I really don’t know why and how the hatred started.

When the “Kabataang Barangay” was first established by then President F. Marcos I was duly elected as the first Chairman and she was elected as one of my councilors. I was not aware that she had campaigned for me. 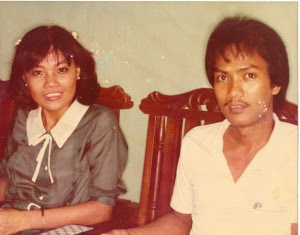 Then we became members of Confraternity of Christian Doctrine (CCD). Here I had to learn how to play the guitar because my voice was not made for singing. She was assigned to fetch the kids for Catechism classes and to serve refreshments afterwards. We managed to be civil with each other in those occasions because we were always near a Priest.

One day, I was riding a jeep on my way to school when I noticed that the girl seated next to me was wearing a Mapua uniform and she was my mortal enemy.
That moment though, I realized that this mortal enemy of mine was a lovely lady, and I started to shift my gear and be a friendly gentleman. I was on my third year of High School then (maagang lumandi! hahaha!).

I was already in my fourth year of high school and she was in her second year when she realized that she loved me too!

Our theme song was a song by Michael Jackson “One day in your life”. The reason why “Jacko” would always be part of my life.

Please sing with me!

Then her parents find out our secret love, the story now becomes “You and Me Against the world“.

So on our first 5 years of being sweetheart we broke up three times. It was always my fault for falling in love with other girls and making the mistake of being caught. I had always been a happy go lucky guy that her parents never saw anything good in my person.

The third time we broke up had me crying during the night but I had to show no emotion in front of my friends. I was not able to eat and sleep that I realized that the lyrics of the song by “Hotdog” titled “Pers Lab” was so true.

(Why is it that when we are young we always associated our emotions with a song?)
Maybe those things and a lot of other petty quarrels had made us closer to each other and provided an inevitable bridge for us to come to know each other very well- like the palm of our hands.

So to cut the story short, we got married at the chapel of Sta Cruz church with only a ring bearer in tow and a pair of Godparents. The chapel was being used by the Parish Priests in their daily personal prayer.

In attendance was my mother, her parents (despite their objections) some close friends and relatives. The Choir where I belong sang in that very solemn occasion.
The reception was held at Modern Restaurant just across Sta. Cruz Church.

Would you believe that we started our family with only P10, 000.00 in savings? Part of the money was used in our wedding expenses including payment for the reception . My best friend Roland’s car was used as the official wedding car which we both decorated with flowers bought at Dangwa. See, sariling sikap talaga!

N.B. This story has been featured in Mon’s blog but it deserves to be included in the Inspirational Book for its focus on the joys of family life.

Mon as fondly called by his online buddies is a down-to-earth, passionate and indefatigable blogger.

He is the vibrant apogee behind the blog – “Fatherlyours”.

“I am Ramon, 49 years old writing for FatherlYours.com to share my experiences, frustrations, happiness, success as a Father to my 5 healthy and Lovely creatures called Son’s and Daughter’s.”

I admire Mon for his dedication and loyalty to his family and friends. He is the responsible man that every family wish they could have.

This story depicts family life and how it should be.

Thanks Mon for this extremely significant contribution to the Inspirational Book. Family should always take the topmost priority in our lives.