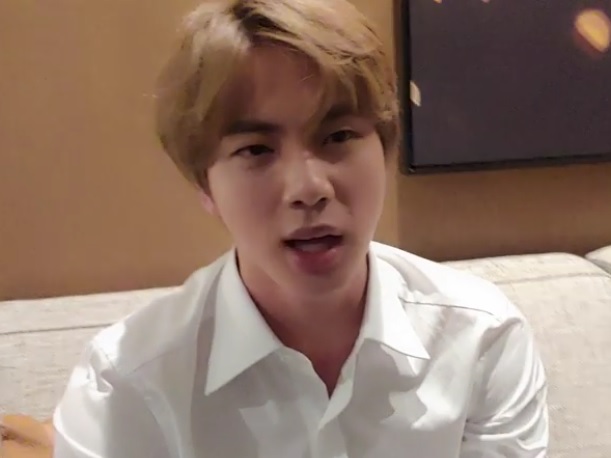 Next in line of the BTS members is Kim Seokjin. Simply called Jin, he is the eldest of the group, and is 27 years old, having born on December 4, 1992. He weighs 140 lbs. more or less, and is 5’10.5”. He majored in acting and films in college and knows how to snowboard, play golf, and likes tennis and swimming.

Jin was recruited for BTS, primarily, because of his good looks. At the beginning, he had no musical skills whatsoever, but through constant practice and dedication, he’s now an incredible vocalist and a superb dancer. Have you hear his rendition of “Awake” and “Epiphany”? They’re masterpieces.

Well, he once struggled in learning BTS’ intricate choreography, practicing more than the others, but he’s now in sync with his band mates with every complicated step.

People can see Jin joking around a lot, but he once confided that he got lonely at times, but he joked a lot for the sake of enlivening the mood of the BTS members. He’s known for his “windshield” laughter and lovable winks.

He once had a misunderstanding with V (Kim Taehyung), another band member, about their dance moves, and he was the first to apologize, revealing to V that he too had struggles at times.

He’s also known for his dad jokes and hand kisses. During events, he randomly surprised the audience with hearts hidden inside his sleeves or clothing.

Being the eldest in Korea denotes authority over the younger ones, but Jin never demanded this from his band mates. He respected the leadership of RM, and helps him prop up the group during hard times.

According to both of them, it was hard at first living together because they have different likes, dislikes, and personalities, but as they interacted for several years, they have learned to respect each other’s preferences and personalities. The Bangtan Boys sometimes joked about his broad shoulders (60 cm wide)

Jin has tagged himself, “Worldwide Handsome”, to which his band mates and their fandom, ARMY, agreed wholeheartedly. Jin considered his Worldwide Handsome moniker as a personal joke, but this label is actually true. It’s because he is truly handsome and had been admired the world over for his perfectly proportional facial features.

The traits that he would like his girlfriend to have are: kind, caring, good to him and must be a good cook. Of course, she must love him as much as he does.

Just recently, he won “The Most Handsome Man in the World 2019” award from King Choice, a popular KPOP & Celebrity Voting Website, among 30 famous celebrities with 444.448 votes.

He was also tagged as the “the third guy from the left”, and the “car door guy” during the 2017 BBMAs, when the locals appreciated his stunning visuals.

Jin’s favorite color is blue, and he is a good guitarist and piano player as well.

He loves to cook, go fishing, and is basically a homebody. At times he took charge of cleaning their dorm.

Jin has a segment called “Eat Jin”, where he cooks and shares his recipes. Incidentally, it’s his role in the group – to ensure that the members are all well-fed. You can observe in some of their videos, how often he had gone around feeding the members.

He made the phrase, “Do you know BTS?” popular because he always asked this question from strangers when he was abroad.

BTS wouldn’t be complete without the unique personality of Kim Seokjin. He will always be “Worldwide Handsome” to BTS and their fandom, ARMY!

What You May Not Know about BTS Member’s Characteristics