I commanded my bare feet to keep running.

My footsteps echoed ominously in the deserted, asphalted street. Rivulets of sweat were trickling down my grimy face; down my eyes, marring my vision.

Just one more corner and I’ll be safe. Please God, if you’re really out there, just this once, help me!

“Over here,” an angry voice startled me. I could hear their footsteps closing in, from the distance. 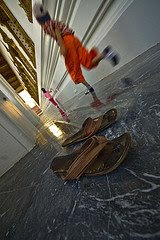 I made one, last turn and there it was – my sanctuary! I lifted the small window, wiggled my way through the small opening, and tumbled unceremoniously down the cold, damp floor below.

My sore muscles groaned as I rolled over to cushion the impact of my fall. I tried to catch my breath as I lay down there winded.

Just then, a voice above me thundered, “Where has he gone?”

“Go on, down the street, he might manage to escape.”

There was a shuffle.

I cringed as his voice came from the small opening where I had slipped in minutes ago.

“Here,” I heard the second man speak in a guttural voice.

I held my breath and waited for the moment of discovery.

There was a tiny flicker of light above me. My teeth were chattering so badly, I was afraid they could hear it.

“How am I supposed to see with a lighter?’ the first man was definitely irked.

“Hey, come on, he couldn’t possibly slip in there, it’s too dark and high. Can’t you hear the rats scampering? He would be screaming in pain and fright right now, if he did.”

I kept still with my head resting on the concrete, damp floor. I willed my body to stop trembling. The rats skittered around in confusion, disturbed by my intrusion.

“We have to be sure! These pesky snatchers should be given a lesson.”

The man attempted to bring the lighter farther down the window, but it was extinguished before he could do so.

The man cursed and stomped his feet in frustration. “If I see that wee shite – I’m going to waste him.”

“I don’t think he’s down there, c’mon,” the younger voice called out.

These men were out to grind me into tiny morsels of useless meat, ready to cook and be gobbled up for their party.

There was a grunt as the second man finally stood up, and I could hear the sound of their running footsteps fading away in the stillness of the night.

I slumped in relief and would have laughed out loud if I had the strength, but I was like a deflated balloon.

I remained supine for a few minutes and basked in the feeling of freedom.

I should thank my “rat friends”. They were as unruly as ever. They never bit me though; perhaps they recognized me by my smell. We share the same stink I believe, there was no water to be able to take a daily bath.

But I have an advantage over them; I took long luxurious baths in Armando’s bath tub, whenever I came up with a “find” (our code word for stolen goods), while they wallowed in this dilapidated room, day in and day out.

Armando was our big boss. We all reported to him whenever we had a “find”.

“Use your eyes, ” he would goad us. “There are many out there. Be sure you won’t get caught!”

Sometimes, when one of us got unlucky, Armando would be in the police precinct in a jiffy. They called him “cap” in that police station and saluted him. I wonder why they did as he had never worn a police uniform.

Almost always they released whoever was caught; after Armando had a drinking spree with them.

My friends and I were scared of Armando because he was enormous and had an ugly, angry scar on his right cheek. The oldest of our group was 12, but he never challenged Armando. We all knew he was our savior! He provided us a roof over our heads and food when we didn’t have any “find.” I was the youngest of the lot at 9 and I was also the skinniest but the most voracious.

I don’t know why my small stomach needed so much food, I was always hungry. Whenever I asked an additional piece of bread from Armando he would snap at me; “Sell more plastic bags and get your “find”. When you do, you can eat up to your heart’s content.”

I chose my clients very well. Those overly-dressed people who scorned at me and cursed me; “Get away from me you stinking rat,” and I was just asking for some spare change to buy food.

I had sold only five plastic bags today and what I earned, could only buy me a piece of candy. I and my friends would sniff “rugby” to forget our hunger pangs. People used rugby as a glue but we utilized it as a drug. We would pour small portions of it in a plastic bag and inhale it until we felt numb and no longer feel our stomachs growling.

It was during times like these, that mother’s memories assailed me: “Always remember the Golden Rule,” she had said and although I was skeptical of it, I tried hard to observe this tenet. It was harder to believe in it when mother passed away.

The pain of my loss had grown hazy now, just a dull gnawing stab of nostalgia whenever I recall my moments with her.

Mother died when a speeding truck hit her in the middle of the road. The heartless driver did not even bother to stop. Father died a month later, some helpful neighbors had helped me out with his burial.

The owner of we were renting had asked me to vacate the place, right after I came from the cemetery. I pleaded with him to feed me and provide lodging and I would be his humble and loyal servant but, “I don’t trust you a bit, go find somewhere else to stay,” he snarled at me.

My neighbors were in the same miserable, indigent state as I was, so there was no help for food and lodging from that corner. Their shanties were not enough to house their own big families – much more to feed them.

So I sold whatever belongings were left and came up with a small amount to buy food for several days until it was gone, pffft…nada… and I was forced to join the street children.

Now my body has grown warmer. I would have to stay for the night here. Those men would still be scouring the streets. 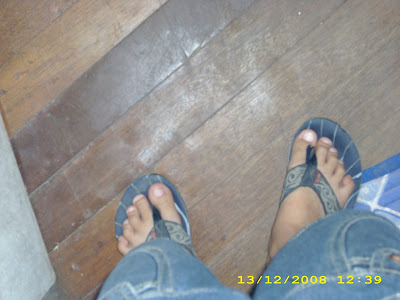 I moved to the farthest corner of the room where I cannot be seen from the window and rested my head on a box.

Slowly I opened my hand to reveal the gleaming bracelet. It was an 18 carat gold! Armando would be proud of me!

Tomorrow, I will have a luxurious, warm bath in his tub and will be clean shaven.

Buying a new pair of slippers is a wonderful idea too, and clothes to match.

I’m certain no one would recognize me in my spanking new haircut, grease-free face, and respectable appearance.

I really look forward to tomorrow!

And by the way, my name is Miguelito!

This is reposted from an article published last January.
( I am thinking of expanding it to a novelette).