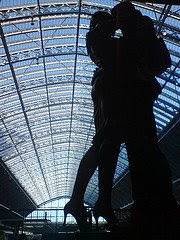 “Will you marry me?” he asked breathlessly. Her smile was like the sun breaking through the darkened sky.

“Yes,“ she said, and their hungry lips met to seal their undying love for each other.

What a wonderful love story!

I closed the book and stared dreamily at its cover. There were two figures blissfully entwined in a tight embrace.

Alas! I sighed. Real life stories usually do not have “happily-ever-after” endings. Broken families around me were enough proof of that. I would rather fantasize about my “knight –in shining armor” through the novels that I read than be part of the drama in real life.

Life is one big irony; however, for on this day, I said goodbye to being single. I understood then what lovers meant when they said that “Smoke gets in your eyes” or that “Love is blind.” Indeed, I was so madly and deeply in love with Jayson, that I opted to be “blind” to the uncertainties of the future and was willing to “cross the seven seas” for him. So on this glorious day, we exchanged marriage vows and it was the start of a new life for me.

God had blessed us with two bubbly kids: a boy and a girl. They had their father’s chinky eyes, thick eyebrows, obstinate nose; each complemented all the other facial features to almost perfection. I was thankful they got nothing from my plain looks.

As I had forseen, married life was a bed of roses – with countless thorns. It entailed lots of sacrifices: I was expected to do all the countless household chores even if I had an 8 to 5 daytime job: in the office –piles of paperwork , screaming deadlines, tumultuous meetings; then when I went home – smelly diapers, baby tantrums, sleepless nights and many more. There were also times that I would have to tolerate my husband’s behavior. When he came home from a drinking spree with his comrades in uniform, I would patiently sponge his body with lukewarm water. These were all the sprinkles of salt that had made my married life more meaningful. I had no complaints because I knew these were all part of the package.

Life though had so much more in store for me, for on this fateful day, I sat staring dazedly at the phone. I tried to control the spasms of sobs that rose to my throat. We had three kids by then and they were joyously romping with their father in the backyard. I thought my Calvary was over when Jayson was acquitted from a “robbery case” and was eventually reinstated in the military service a year before, but how wrong I was! Here was another tempest about to wreak havoc in my family.

“Jayson told me that we’ll be together soon,” she had purred into the phone. “A few more years perhaps, until your youngest is of an age to understand.” 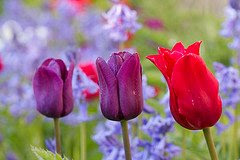 I believed her then, for she had known a secret which I had always thought, only I and Jayson knew about.

I did not have enough courage to confront Jayson. What I knew was that I still loved him with the same intensity, after all the years that had passed. Did he still love me? I wanted to ask him then but whenever I started to do so, my eyes would brim with tears and a lump in my throat would choke my words. So, whenever he caught me teary-eyed, I made plausible excuses.

“We are on red alert. I won’t be coming home tonight, please go to sleep early,” he would say, during the nights he was not able to come home.
I convinced myself that he was telling the truth, but now and then I would catch a whiff of a woman’s perfume on his shirt.

The kids were unaware of my Calvary, however. They adored their father and he loved them in return, that I wallowed alone in my misery. I consoled myself by reading the Holy Bible. “Love beareth all things…”

During the past two years, my heart became numb with pain from the constant calls of his mistress. I suffered in silence, ignoring his late –nights out, his missing shirts, and the indications of his infidelity. My love for him and our children was greater than my pain. You may call me a fool, but the happiness of my children was foremost in my mind.

But that day, the woman called, “We will be starting a business, do you want to be our guest?”

A nerve snapped in my head and that did it! I had had enough of this BS!

When he came home that night, I confronted him and had hoped to high heavens, that he would deny my accusations, but all I got was the silence of acceptance. I pounced at him when he attempted to take me in his arms and snarled vicious words at him in my anger.

That night after the kids slept, I slept in a different room for the first time. I prayed so hard for divine guidance. God help me to be strong!
When morning came, Jayson acted as if nothing happened and I joined his charade in front of the children.

My husband urged our youngest son to light the Christmas candle. We all cheered when it exploded into a kaleidoscope of colors.

Our children trooped to kiss and hug us both.

I gazed happily at the family that I had fought tooth and nails to keep whole. I thank my lucky stars my love for them was great enough to weather the storms that had crossed our path. I thank God for making me realize that the painful events that occurred were just some of the crosses I have to carry stoically, for they will all come to pass.

It was difficult at first to forgive Jayson when he had pleaded for forgiveness. He realized that he had to choose between his family and his mistress and that he could not have both. We had moved to another town to start anew , and it was all worth it. The woman attempted to call Jayson several times through his cell phone, but he ignored it. He decided to change his number when it was evident, she would not stop. She was an ardent pursuer –that woman! Any man could fall into her claws just because of her persistence. I thank God, we were able to evade her venomous reach.

Happily- ever- after endings do happen in real life. It takes TRUE LOVE, understanding, and forgiveness to be able to achieve it.

I’m happily snuggled up with my husband right now, as I write the draft of this story. He’s contentedly watching our children opening their gifts.

I would like to acknowledge the efforts of Jean Knill of Jean’s Musings for this story. Thanks Jean.
Photo 1 by victoriapeckham
Photo 2 by Peter Giger
Photo 3 by notsogoodphotography

23 thoughts on “Was Love Meant to Last Forever?”